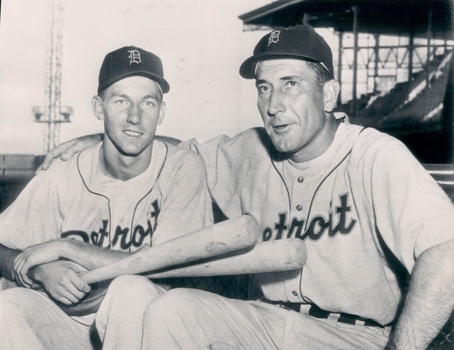 Kaline with Manager Fred Hutchinson: 6/23/1953
What was "Kaline's Corner"?
Hall of Famer Al Kaline signed with the Tigers on June 20, 1953, the day after he graduated from high school, receiving a signing bonus of $35,000. Baseball rules at the time required that any player receiving a signing a bonus of more $4,000 was required to be on the major league roster for a minimum of two years; so Kaline skipped the minors completely. Ed Katalinas, the scout who signed Kaline, drove the young "bonus baby" from his hometown of Baltimore to Philadelphia, where the Tigers were about to open a three game series with the Athletics. Kaline made his major league debut on June 25th, 1953, six days after graduating from high school. 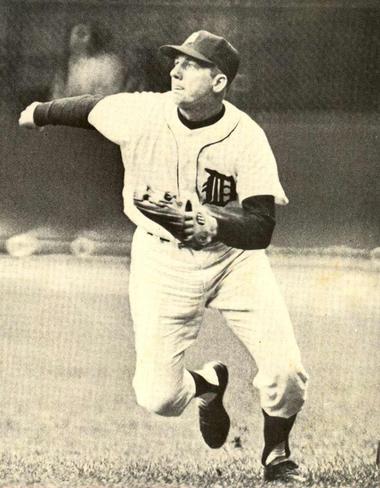 Kaline only appeared in 30 games in 1953, but
became the regular right fielder for the Tigers in his first full season in 1954. Briggs Stadium, as Tiger Stadium was then called, had box seats in right
field that jutted out into the playing area. Kaline had banged into those seats during the 1954 season. Tigers owner, Spike Briggs, in an effort to protect his
investment with Kaline, ordered that set of seats removed  after the 1954 season. Thus, right field became known as Kaline's Corner. It's not every day
that a ball park is modified for a player.  Kaline went on to become the youngest major leaguer ever to win a batting title, collect  3000 hits, and become a
first ballot Hall of Famer.
The Evolution of Kaline's Corner
Newspaper Articles of the Day
Other Photos Of Kaline's Corner 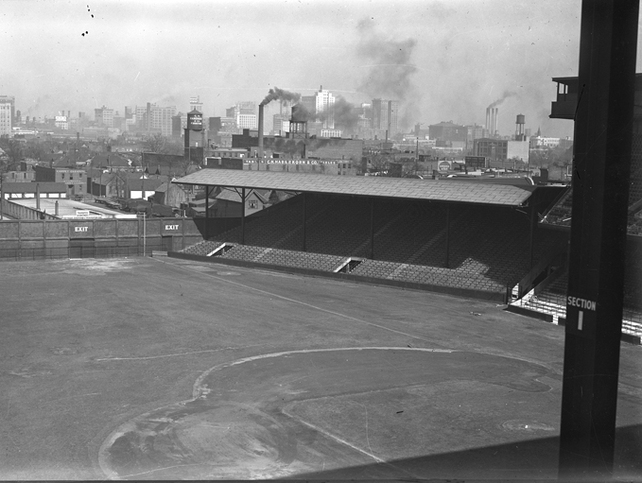 Long before it was called Tiger Stadium, Navin Field  was a much smaller ballpark. There were no right field seats, and not much of a "corner" to worry about. The park wasn't completely enclosed and double-decked until 1938. 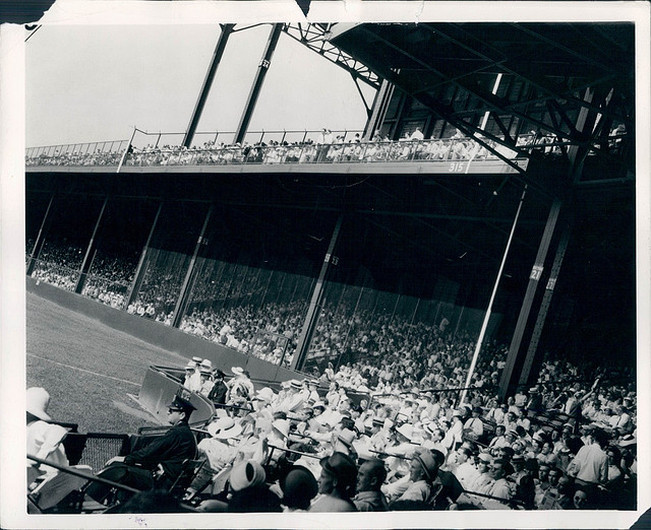 A fan's view of Kaline's Corner from the stands. Notice the fence that used to be in place across the lower deck. This is also a great shot of the upperdeck overhang. 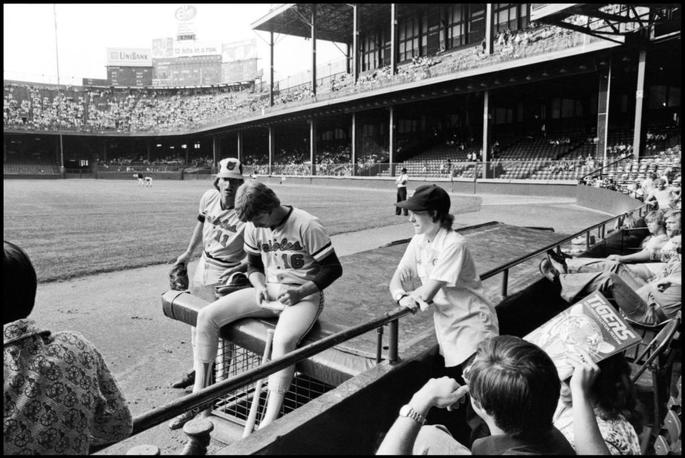 July 3rd, 1975: Tony Muser of the Baltimore Orioles sitting on top of the visitors bullpen signing an autograph. Kaline's corner is in the background. 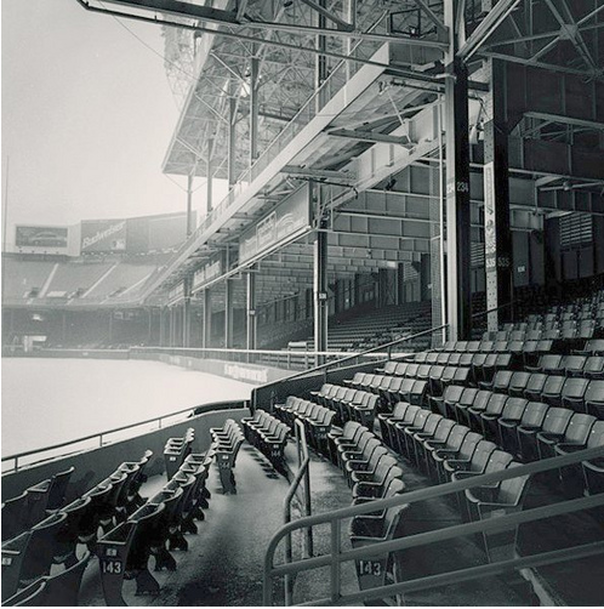 Kaline's Corner in the snow. 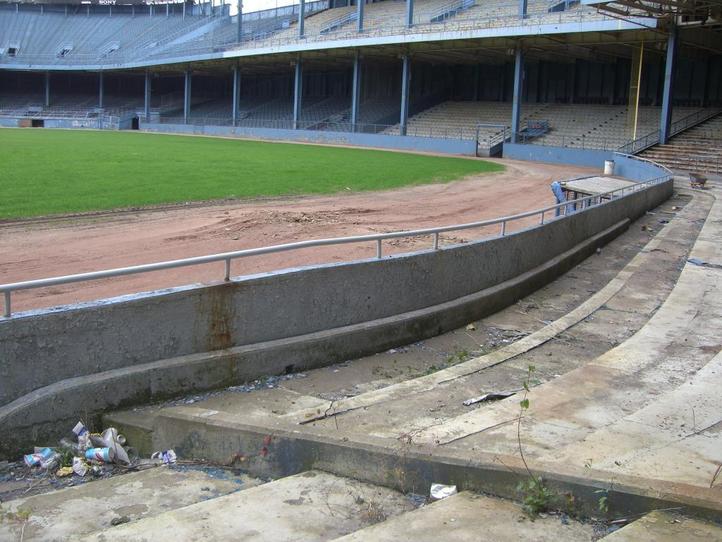 Kaline's Corner after the seats had been removed from Tiger Stadium, before demolition. A sad picture... 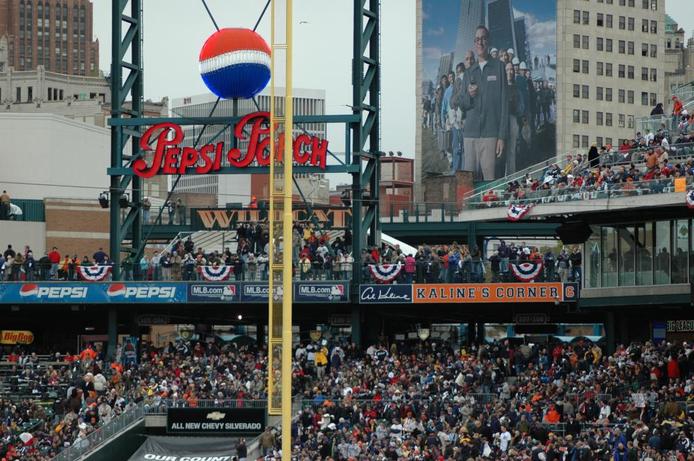 The tradition continues. The Tigers named the section in right field "Kaline's Corner" at Comerica Park, which replaced Tiger Stadium in 2000.

Please contact me if you have any cool photos, information, or stories about Kaline's Corner